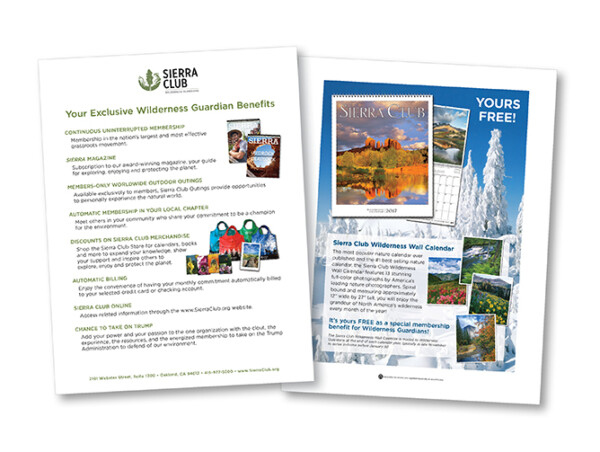 Sierra Club already had a robust monthly sustainer Wilderness Guardian (WG) program, however, a strategic decision was made to repurpose funds to invest more heavily in both new sustainer acquisition as well as existing donor conversion to pledge. In collaboration with MarkeTeam, a number of new strategic, creative and analytic approaches were instituted with great success.

DIRECT MAIL: As mentioned above, the appeal effort during the Monthly Giving Month had a pledge ask for all recipients. In selected appeals throughout the year, cohorts identified by MarkeTeam’s pledge model were targeted to join the Wilderness Guardian program. Benefits of membership were included in the mail pieces and the donors were promised an introductory gift for joining.

The multi-channel approach and investment led to a 16% increase in the number of new Wilderness Guardians in 2016 up to the Presidential election. Post-election and into 2017, Sierra Club redoubled its efforts, using MarkeTeam’s model for online ads, with sustainers increasing by over 250%. Compared to using Facebook’s internal look-alike modeling, Sierra Club’s cost to acquire using MarkeTeam’s look-alike modeling was reduced by more than 80%.