In the recent donorCentrics Index of Findings for Q1 2019, one metric stood out: a decline in supporter reactivation. With acquisition getting more difficult each year, it’s of critical importance to engage newly acquired donors to make sure they will become long-term supporters. 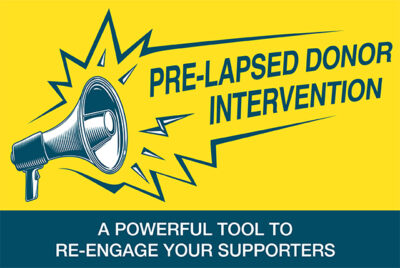 One of the key interventions in the lifetime of a supporter is to ensure that they continue to support your organization every year. The sharp decline in response between current-year and lapsed supporters calls for a special campaign to re-engage them with your organization, and re-affirm the need for their support to keep them active.

There are a number of high-impact strategies that can be used in the pre-lapsed stage (8-11 months without a donation). MarkeTeam has found that an overlay mailing (a communication in addition to the typical renewal messaging) precisely focused on these supporters is the best way to encourage these critical supporters to renew their giving.

In some cases, this takes the form of a “stick of dynamite” in the mailbox, using a higher-value premium to incent opening and response for the highest-value lapsing supporters. However, lower-cost interventions in the form of a personal note or reminder that shows the date of the most recent gift is often sufficient to “move the needle.” Gaining a response of just a few percent for these timely overlay mailings can make a significant difference in both first-year and multi-year retention—a massive improvement in ROI over acquiring a new supporter.

In some cases, this takes the form of a “stick of dynamite” in the mailbox, using a higher-value premium to incent opening and response for the highest-value lapsing supporters.

A MarkeTeam client incorporated this strategy to reactivate over 8,000 pre-lapsed supporters (with an outstanding average gift). The lapsed intervention strategy first identified segments of high value supporters who then received a tailored package reintroducing the organization and re-enforcing its critical work.

When building a lapsed intervention strategy, be sure you know the following:

Reminding your donors of the importance of their support can provide the nudge needed to recommit them to your mission!