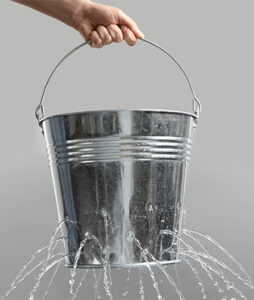 Fundraisers understand the “leaky bucket” analogy for donor file retention: sufficient new and recaptured donors need to replace donors who discontinue their support. But where does the smart fundraiser focus their attention?

With most new donor acquisition already at the maximum sustainable levels, adding volume is usually not an option. Similarly, lapsed recapture efforts have a limit on the audience size—even if a charity has hundreds of thousands (and sometimes millions) of lapsed supporters, most of them have aged out of supporting any organization.

On the other hand, by plugging some holes in the leaky bucket, file stability can be maintained, or donor file growth attained.

What targets have the biggest “bang for the buck?” MarkeTeam suggests two critical points in the donor lifecycle:

1. Retention of first-year supporters (new donors/members during their first 12 months)
First-year donor retention rates—in comparison to multi-year retention rates—are abysmal for almost every charity. Typically, less than one-third of all new donors will repeat their gift in the following year, and sometimes far fewer.

Having tracked millions of supporters for a wide range of charities, MarkeTeam has found that the most critical audience of supporters are new donors who haven’t made a second gift by the 9-12 month mark. At that point, virtually all recently acquired donors who renewed through your charity’s normal house mailing cycle have already done so. 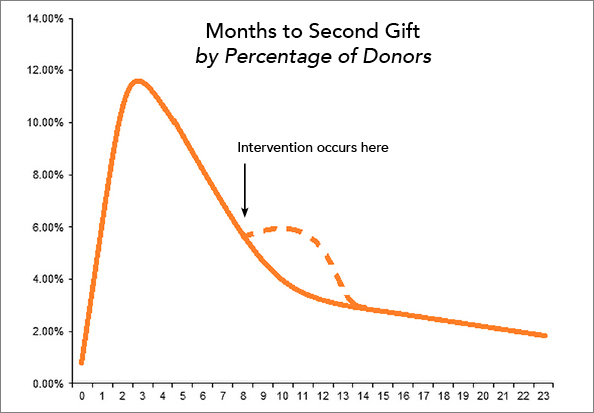 Many organizations simply give up at that point and begin suppressing non-renewed supporters from typical house mailings. The lack of response often suppresses supporters from digital campaigns, too, thereby cutting off this critical group of donors from any communication.

What is needed is an intervention—a “stick of dynamite in the mailbox” that creates high opening and response for the very best of the almost-lapsed supporters. In many cases, this can be a high-value heavily branded premium, or an out-of-the-ordinary offer that is strictly aimed at gaining a second gift.

When compared to spending additional funds on acquisition or lapsed recapture efforts, the ROI on interventions is extremely high. Most perform around breakeven, and retention rates can be dramatically raised on this key audience.

When compared to spending additional funds on acquisition or lapsed recapture efforts, the ROI on interventions is extremely high.

Using a high-value premium/follow-up strategy—or “bolting on” a back-end premium to an existing strong offer—can often generate a 3% to 6% response in a single mailing slot. If your charity’s current first year retention is around 25%, think of the impact of a one-shot intervention that generates a 5% response! When targeted to the higher-dollar supporters, an intervention strategy can help your charity retain the best of the best.

2. Retention of multi-year supporters (two years or more of retention)
The most significant net income audience for charities is comprised of donors who have supported your organization year after year. One of MarkeTeam’s tools reports on the number of 2-year, 3-year, 4-year and 5+year donors in the multi-year category—and their retention rates—to highlight any weaknesses for a particular cohort.

Sometimes a “class of” donors will exhibit poorer retention due to outside factors like the “Trump bump”, an international disaster or a domestic one-time event. In those cases, targeted actions demonstrating the impact of the organization will need to be designed, implemented and perhaps communicated over and above the normal level of messaging.

But in many cases, a simpler intervention such as donor recognition can be extremely effective. Recognition at various lifecycle events (3-year, 5-year and 7-year anniversaries, or for completing one year as a monthly sustainer) can be a powerful tool, ensuring that supporters know that they are loved, honored and respected for their loyalty and longevity. The most critical period for showing gratitude is—of course—right before year-end (for donor organizations) or immediately before a renewal point (for anniversary membership organizations).

The experience of MarkeTeam’s clients show that donors who receive interventions and renew their support have very similar long-term value to those who renewed earlier without an intervention. Part of that LTV improvement is due to selecting higher-dollar supporters, but the one-time intervention seems to bond a supporter to the charity over the long run.