How to Win a MAXI Award?

After bringing home a gold and silver last year, we are excited to announce that MarkeTeam has been awarded THREE 2019 MAXI’s (MARKETING AWARD FOR EXCELLENCE & INNOVATION), and will be honored at this year’s 40thAnniversary awards celebration!

While we won’t know if our winners are gold, silver, or bronze until the presentation ceremony at the start of the Bridge Conference (held July 10-12 at the Gaylord National Hotel in National Harbor, MD), we are immensely proud to be recognized for excellence and innovation in marketing … with the results to back it up!

The most important aspect of the MAXI awards is that it’s not just about appearances—it’s about delivering results!

This year, I had the honor of serving as a Maxi judge for the first time (and no, I wasn’t able to judge any of our entries), so I can attest to the stiff competition. While the judging is completely blind, one thing is clear: there are many great direct response minds working hard for charitable causes using innovative copy platforms, creative approaches, and attention-grabbing offers.

But the most important aspect of the MAXI awards is that it’s not just about appearances—it’s about delivering results! Below is a review of our winning packages this year, with the challenges, approaches, and results that helped bring home the hardware:

Seizing the Moment with the Humane Society of the United States

The HSUS Humane Leader Mid-Level ($1,000+) program has had a traditionally-weak mailing slot in January (post year-end, where they raise a substantial portion of their revenue). The 2018 objective was to generate more revenue and responses, while continuing to cultivate these important donors via timely updates to bond the relationship. 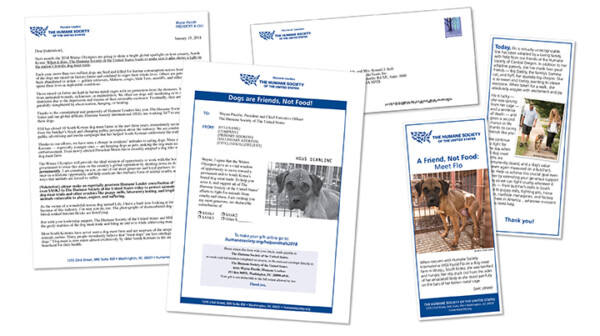 With the world focused upon the 2018 Winter Olympics in South Korea, we formulated a plan to “shine a spotlight “on gruesome dogmeat trade in Asia. South Korea has long hosted a Bok Nal festival in which dogs are killed and eaten each year. Our package highlighted that more than 2 million dogs are bred and killed for human consumption, many of them pets who were abandoned or stolen. Raising awareness of the grisly conditions these dogs endured, we demonstrated the advances being made in shifting public opinions against dog meat, and how the supporters could accelerate efforts to permanently shut down the practice.

While our goal was to drive donations, we also sought to create transformational change on how animals are treated. To further connect Humane Leaders to the mission, an insert featured the story and photos of Flo, a dog rescued from a dogmeat farm to demonstrate the power of the donors’ support.

The results were outstanding! The new campaign generated a stunning 73% increase in gross revenue and more than doubled the responses from the previous year.

Because of the success of the campaign, ongoing communications were implemented about dog meat in subsequent mailings. This culminated in a “Close the Loop” postcard featuring a dog adopted by a U.S. Olympian. Gus Kenworthy, a silver medalist, worked closely with the HSUS to raise awareness of the trade and its success in closing more than 12 dog meat farms.

Why it won: Seizing the moment with a disruptive campaign—juxtaposing the jarring practice of the dog meat trade while South Korea was hosting the world’s Olympics—coupled with providing progress updates in subsequent campaigns helped to reiterate the impact of leadership support.

Tying a Premium to the Mission for Smile Train 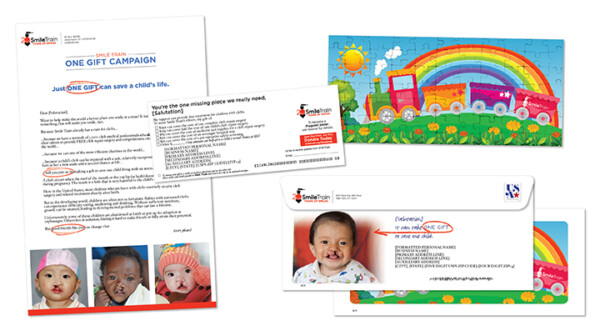 SmileTrain has a longstanding World Map acquisition control that has effectively and efficiently used an oversized map as an upfront premium. The goal was to find an alternate approach that would provide sufficient lift and maintain a comparable net/new donor.

A small jigsaw Puzzle was developed as an upfront premium showcasing an image of a train, branded with the organization’s logo. The copy platform highlighted that the reader could be the “missing piece” of the puzzle to help children living with untreated cleft lips and/or palates. The childlike premium was prominently displayed through a jumbo window, reinforcing the impact on young children’s lives.

The results were not puzzling, providing a 71% lift in response over the control. Although the rollout costs were more expensive, the overall net/donor improved significantly, allowing Smile Train to mail in volume and generate 37% more donors at the same cost.

Why it won: This package epitomizes a holistic approach on creating a successful new package. Knowing that a puzzle would be more expensive than a paper map, the package was designed to use common elements, mail at the efficient letter rate, and integrated mission-oriented calls-to-action to keep costs in control. With the high-cost puzzle insert, MKT knew that it had to show it off to generate opening. 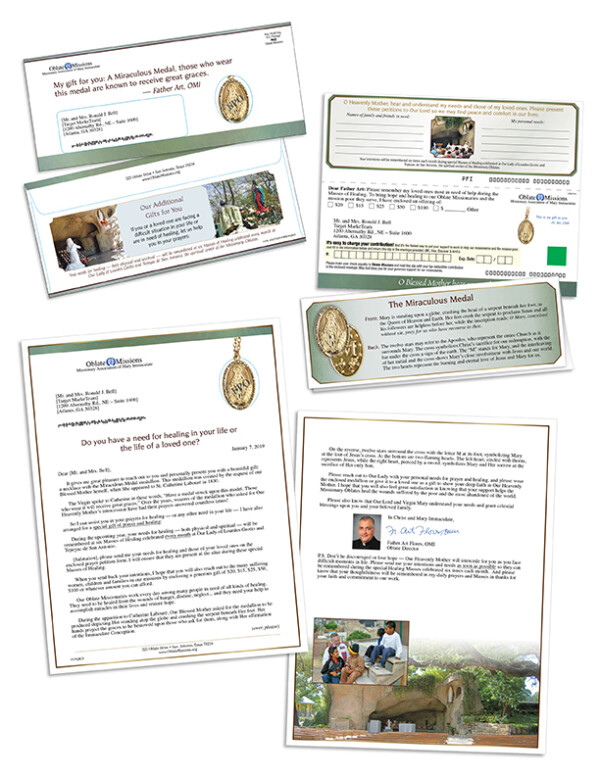 Why it won: This test was risky due to the added cost of an upfront premium, but the risk/reward tradeoff meant that a small test quantity could have a significant increase in acquisition. The use of an upfront premium led to a nearly-4X improvement to the response rate over the control, while maintaining the average gift (upfront premiums can often drive response but show a decrease in gift amount). The CP$R and net/donor improved as well, with some cold acquisition lists actually generating positive net income. To ensure that the test results could be rolled out with certainty, the package was tested two additional times to verify the results. It now stands as one of several rotating control approaches. Interestingly, the old adage of “renewing donors in the same manner they are acquired” was turned on its head by applying housefile learnings to acquire new supporters. Chances are, if it works for your donors, it will work for your prospects, and vice versa.

Consider how you can use some of these tactics in your own fundraising efforts to “MAXI-mize” your results!