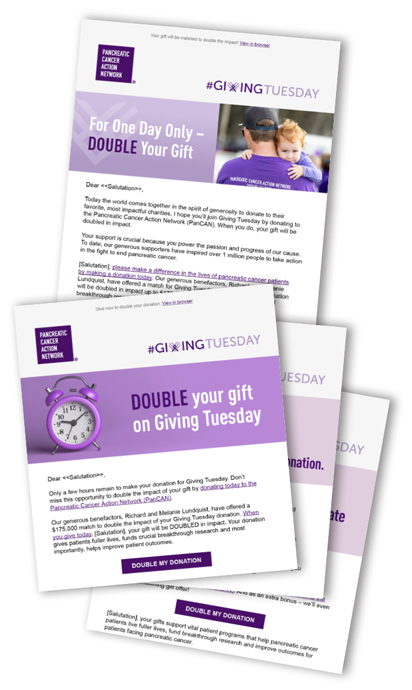 BACKGROUND: Now that Giving Tuesday has become such a high traffic email day, it has become increasingly challenging for nonprofits to stand out in the inbox. In the first year of MarkeTeam (MKT) and Pancreatic Cancer Action Network’s (PanCAN) working relationship, MKT was tasked with increasing revenue YOY for their Giving Tuesday campaign which has been one of their highest performing campaigns in the past. Because there is such heavy competition on Giving Tuesday, MKT advised that communicating via multiple channels would be the best way to drive incremental revenue and boost performance.

STRATEGIC APPROACH: A multi-channel approach was developed to maximize revenue for the international day of charitable giving. The campaign consisted of a three-part email series, a lightbox and an expanded graphic sliver banner. As an added incentive to donate, a match offer was promoted through all channels (email and website) which offered the opportunity to double the donor’s support. The Lightbox, Sliver Banner and Emails were all branded to #GivingTuesday while also featuring PanCan’s signature use of purple.

In order to maximize email revenue, we included supporters that ranged from donors to event participants to volunteers.

RESULTS: The implementation of the multi-channel approach (three-part email series, website lightbox and website sliver banner) drove a 145% increase in revenue YOY. Because we were able to reach people via the website that may not have been communicated to otherwise (if they were not on our email list), this helped boost performance.